The Last Hurrah, signing off.

The Midland Expo series of annual shows which started in 1994, presented by IPMS Birmingham and, until 2003, in partnership with the Universal Modelling Society of Birmingham (UMS),  has now come to an end.

Over the years the show has been held at two venues, initially at the Leasowes Sports Centre, then after a hiatus of seven years between 2004 and 2010, at Cocks Moors Woods Leisure Centre in 2011, before returning to the Leasowes in 2014. Over those years we have made many friends and contacts, had a lot of great times, as well as a few tense moments when things looked like they were about to unravel.

I would like to thank all of those who have supported Midland Expo throughout its existence, the Clubs, Special Interest Groups and the traders. Not forgetting the visitors who have parted with their money to come along and enjoy the show. Also a special mention for Chris Bennett and his staff at Leasowes Sports Centre for their enthusiasm and commitment to making the show a success.

And finally I need to recognise the immense contribution of our own IPMS Birmingham membership in organising the show both during the preparation and on the show days themselves, without their contributions the show could never have happened.

For details of this year's show including the competition results please go to the Midland Expo 2017 "The Last Hurrah" page.

This website will remain available on-line as a historical record of the show, the Facebook page will remain active for a short while but will be closed down in the near future and any further references to the show will be carried on the IPMS Birmingham Facebook page.

Into the final straight!

Yes, there is now less than a week to go! 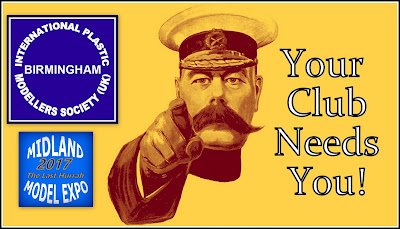 Image from the IPMS Birmingham newsletter urging
members to volunteer for duties on the day.


All the arrangements have been made, T,s crossed and I,s dotted. All the trade spaces have now been taken but we do have a couple of exhibitor slots available for any latecomers - if your club or SIG want to come along please contact Matt via the Exhibitors Page, Unfortunately one trader, Alley Cat has had to cancel owing to personal reasons.

The show timetable has been updated here, as have the directions here.

Briefings will be sent out via email to all exhibitors and traders in the next couple of days.

The only thing we can't arrange is the weather, according to the forecast, on Sunday we should have light cloud and moderate temperatures, which would be ideal.


Please note:
Leasowes Sports Centre, being on school premises is now a smoke free site i.e. no smoking anywhere in the grounds, which means anyone wanting to smoke will have to go to the front gate.
Posted by Roland at 19:06 No comments:

Lists of Traders and Exhibitors.

Lists of Traders and Exhibitors attending Midland Expo 2017 "The Last Hurrah" are now available on their respective pages of this website. In some cases we are awaiting confirmation and would be grateful if the representatives of those clubs, SIGs and traders would get in touch us. Also if you have sent a booking but do not appear on the appropriate list please contact the relevant booking secretary show at the top of each page.

Following the expiry of the the priority booking period there are still some spaces available at Midland Expo 2017 “The Last Hurrah” for both traders and exhibitors (clubs and SIGs). Remaining spaces will be allocated on a first come-first served basis so it is recommended that any clubs or traders wanting to attend submit their bookings as quickly as possible.


MidlandExpo 2017 “The Last Hurrah” Exhibitor invitation and bookingform.
Posted by Roland at 10:49 No comments: 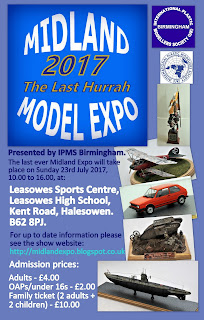 As many will already know, this year's show will be the last ever Midland Expo, hence the tag-line "The Last Hurrah". The reasons are explained in the statement from IPMS Birmingham's Chairman, reproduced below.

The preparations for the show are now well advanced, with priority invitations having gone out to traders and exhibitors (Clubs and SIGs) who have supported us in recent years. If you are in this category but have not yet received an in invitation please contact the individuals shown below. The priority invitations are valid until the end of April after which any unbooked space will be made available to all-comers on a "first come, first served" basis.

Following this year's Midland Expo (2016) the Branch Committee and Show Management Team undertook, as usual, an analysis of the event and came to the realisation that, for various reasons, the show would become untenable within a very few years.

From a financial standpoint we have seen a year by year reduction in returns from the show and can predict that there will come a time in the not too distant future when it will start to become loss making. Inevitably costs rise each year which can only be offset by increasing trader fees and entrance prices which we feel would be counterproductive.

Separate to the financial considerations there is also the availability of the organisers. Put simply we are an ageing group - of the six of us involved this year only two are under sixty and none under fifty - I am pleased to add that Karl Robinson has since come on board for the final year which redresses the balance a little. None-the-less it does mean that a substantial proportion of the organising team are either retired, semi-retired or nearing retirement, and while that might be expected to give them more free time, in reality most have plans or commitments that mean that they will have less time to devote to running the show.

Other factors include recent and possible future changes to legislation regarding public events and ensuring our organisers and members are properly protected against legal action and covered by public liability insurance.

Given the above and not wishing Midland Expo to fade away ignominiously we took the positive decision to have one last show – Midland Expo 2017 with tag-line (Competition Secretary George Green's suggestion) “The Last Hurrah”. 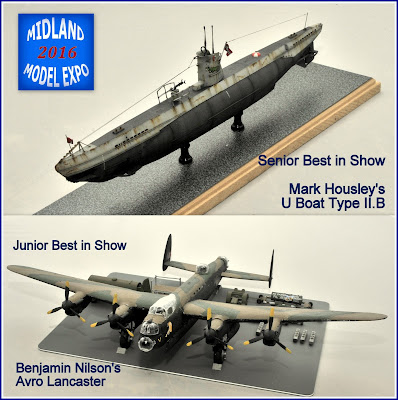 So, Midland Expo is over for another year and the organisers are now taking a well earned rest for a few days. There are of course a few jobs to be done such as producing a final set of accounts to see if it was all worthwhile financially. We will then have to review the show and start look forward to what we are going to do next year.

Meanwhile our friends at Leicester Modellers have arlready published a review of the show on their own website, complete with a photo gallery.
Posted by Roland at 19:58 1 comment:

Where Can We Go. Com